The form of governance can change as an industry evolves and matures, and governance patterns within an industry can vary from one stage of the chain to another. The dynamic nature of governance can be largely accounted for with three variables: the complexity of information that the manufacture of a product entails (design and process); the ability to codify or systematize the transfer of knowledge to suppliers; and the capabilities of existing suppliers to efficiently and reliably produce the product. Additional influences on the governance structure include the quality, stability, and power of the business enabling environment and institutions, as well as other sources of power in the chain, such as suppliers and consumers.

Information complexity refers to the intricacy of information and knowledge that must be transferred to ensure a particular transaction can occur. This is important when working with suppliers on complicated product and process specifications—the more complex the information, the costlier the effort to control and coordinate production, which raises switching costs.

Information codification is the extent to which lead firms can convert tacit, implied information and knowledge into explicit, concrete and situation-specific information and transmit it to producers effectively, efficiently and at minimal cost. It is absolutely critical for lead firms to tell suppliers exactly what they want and how it should be made–if suppliers do not understand what buyers want, they cannot produce to specification and meet standards, and buyers run the risk of losing their customers. In some industries, systems have been established to codify complex information so that data can be handed off between value chain partners with relative ease, often using advanced information technologies.

The ability to create computer-assisted designs (CAD) and the development of machinery that can easily read the resulting files exemplifies how information can be codified and has enabled the design function in many value chains to be performed by suppliers with less direct control by buyers. Another example of codification is seen in the development of industry-wide standards, such as International Organization for Standardization (ISO) standards. ISO 9000, for instance, is a generic, quality management standard that assures a product or service conforms to established and specified requirements, and that the firm or service provider has appropriate procedures in place. Buyers know which suppliers comply with ISO specification via certifications that are conduced by third-party auditors. [2]

Supplier capability refers to the ability of suppliers to meet all transaction requirements. These may include quantity and quality specifications, on-time delivery, and environmental, labor and safety standards. One aspect of supplier capability is often the accessibility of appropriate support services, such as input supply, equipment maintenance, transportation, certification and assistance with documentation and licenses. If affordable, effective services are not available, suppliers are likely to rely more heavily on buyers to meet these needs.

Suppliers’ capabilities frequently improve over time, and this element of learning plays a crucial role in the upgrading trajectories of supplier firms. For example, lead firms may directly invest in upgrading their suppliers’ production capabilities and production-related know-how. However, suppliers can capitalize on these relationships and acquired assets to further develop capabilities in branding and distribution, as seen in both local blue jean producers in Mexico’s Torreon region (Gereffi, 2005, World Bank updated case study) and in East Asian apparel manufacturers. [3]

If one of these three variables changes, then value chain governance patterns tend to shift in predictable ways. For example, if a new technology renders an established codification scheme obsolete, modular value chains are likely to become more relational; and if competent suppliers cannot be found, captive networks and even vertical integration would become more prevalent. Conversely, rising supplier competence might result in captive networks moving towards the relational type, and better codification schemes set the stage for modular networks. 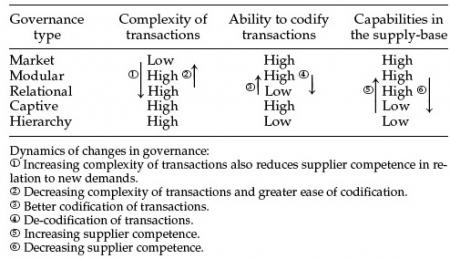 The most common initial form of governance that lead firms establish with MSEs in developing countries is the captive form. In captive value chains, the lead firm (typically a global buyer from the United States or Europe) exhibits a great deal of control over the actors in the chain. In contrast, relational structures are the least likely to initially occur between developing country producers and global buyers due to the knowledge and skill gaps, as well as social and spatial divides. [4] [5]

The following are examples of changes in variables that result in a change in the type of firm governance:

If the governance mechanism in an industry is not adequately explained through one of the chain governance structures, then an alternative factor, such as a strong institutional environment or other sources of market power, is likely to be at work.

Business Enabling Environment and Institutions: The business enabling environment incorporates the physical entities, including government agencies and nongovernmental organizations--such as multi-lateral agencies, industry trade groups, labor unions and advocacy groups--that set forth institutions. These institutions are defined as the rules that govern society, including laws, policies, standards and societal and cultural norms that impact the competitiveness of an industry and shape the forms and actions of entities in the business enabling environment. Institutions can be legally or voluntarily enforceable. The rules/institutions set by the enabling environment are derived, to a greater or lesser degree, by the beliefs, values, meanings and priorities embedded in the societies that create, fund and staff them. As a result, limits are placed on actions, and firms or managers that surpass those limits run the risk of sanction, creating pressure for firms to operate according to the norms and expectations of the societies in which they operate.[6]

The business enabling environment not only sets rules; it also creates resources to facilitate compliance with rules set by internal and external members of the chain. The enabling environment also acts as a “check and balance” system—when lead firms become too powerful or engage in predatory practices, institutions can place limits on these actions. For example, the power attributed to buyers such as Nike or The Gap is associated with their brands’ reputations. When these firms’ reputations were threatened by external activists’ accounts of unethical labor conditions in their factories, the lead firms were quick to voluntarily improve their conditions. Later on, this frequently leads to mandated institutions to regulate social and environmental practices, as well as means to ensure, certify and assist factories with compliance.

Power: Power is the ability of a firm or organization to exert influence and control over other firms in the chain. At the firm level, power is accumulated, held, and wielded in different ways and in different amounts. Power can come from any part of the value chain structure, in many different forms. Within the chain, power comes from firms and the workers within the firms. Power within the chain can be divided into power exerted by lead firms or from suppliers. Outside the chain, power comes from institutions created by the enabling environment and consumers.[6] Those in possession of industry power actively shape the distribution of profits and risk through their activities.