It is quite common in USAID documents to see sentences such as:

“This is the largest cohort of youth ever in the history of the world.”

At first that sounds shocking, even alarming. Oh, no! We’d better do something! And, as someone who has been studying and writing about youth and youth employment for quite a few years, I guess I plead guilty.

But as a share of the population and of the working age population (which is what matters for youth employment), youth are declining. Have a look at the graphs below. The first one shows youth as a share of the working age population, by region. In this graph, we learn that in all regions of the world, the youth share is declining. Even in Sub-Saharan Africa (SSA), where it peaked in 2005. Now, it is not declining very fast in SSA, but it certainly has peaked. And since youth’s labor force participation is less than adults (because youth attend school during part of their youth and should not be working), the share peaked even earlier and at a small share.

Some countries are lagging, in particular, those with high fertility, such as Niger where the fertility rate was 6.5 in 2017. But in the five USAID-assisted countries with the highest fertility rates last year, three (Burundi, Mali, and Angola) have already seen their youth peak as a percentage of the working age population and the other two (Niger and Somalia) are projected to peak by 2030. Higher death rates among the working age population (ages 15-64) could also contribute to these trends.

The issue of youth as a period in the life cycle, with specific challenges for families, communities, and societies, remains relevant as a policy concern, just as other key development periods (such as early childhood) are relevant. And in SSA, where the share of youth in the working age population is falling quite slowly, the challenge of incorporating new entrants into the labor force and the economy will continue as long as economic development lags (see my paper on this issue here). But overall, as the first graph shows, most countries survived the youth bulge and are chugging along just fine, with a few bumps in some cases. This is heartening. For SSA and all the youngest countries, the message should be – you can make it. Don’t panic. Most countries before you successfully came out the other side of the youth bulge.

Maybe instead the message should be – in USAID, we need to worry more about aging populations than we do now. That includes, for those still in their working-age years, how to work longer, healthier, and smarter, so that they don’t become a burden to their children. This has been the main employment crisis in Eastern Europe and Central Asia for some time and will soon be the one we worry about in South and East Asia. My expectation is that by 2040, the old-age crisis will even be an economic-demographic event in some SSA countries.

Dr. Louise Fox is USAID’s Chief Economist. In this role, she guides the Agency on economics-based decision making and is responsible for keeping USAID’s economists on the cutting edge of ideas in development economics. 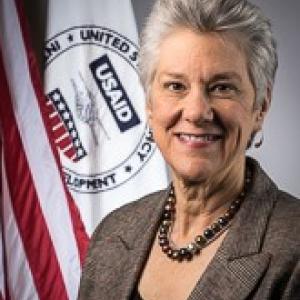