To help countries to achieve self-reliance (as described in  Box 2), as well as to meet the 2030 Sustainable Development Goals, women’s economic empowerment and gender equality must become cornerstones of development programming.  There are some promising developments. The past decades have seen a significant increase in the health and education levels of women and girls. Similar progress, however, has yet to be achieved in women’s economic empowerment. Women continue to trail men in formal labor force participation, rates of entrepreneurship, and income levels, in part because of structural barriers (including inadequate access to credit and weak inheritance and ownership rights) and in part due to social norms and unconscious bias in the workplace.

When women do join the labor force, they are more likely to work part-time and in occupations that pay less. Moreover, 58 percent of women globally rely on income from work in the informal sector (such as domestic work or self-employed, home-based work) which is more vulnerable.1  As a result, women earn less than men on average, which, in turn, diminishes their bargaining power and voices in both workplaces and households.

The gender wage gap also has significant global economic implications. The World Bank estimates countries are losing $160 trillion in wealth because of differences in lifetime earnings between women and men.2  Reducing gender gaps can have far-reaching benefits: it boosts economic growth and productivity; leads to greater equality in the overall income distribution; supports higher corporate profits; increases economic resilience; supports bank stability; contributes to improving other development outcomes.3  A significant body of academic, donor-funded and evaluative research and evidence supports this conclusion. Table 1 highlights some of the opportunities offered through meaningfully advancing WEEGE, alongside the risks of continuing under a business-as-usual scenario. 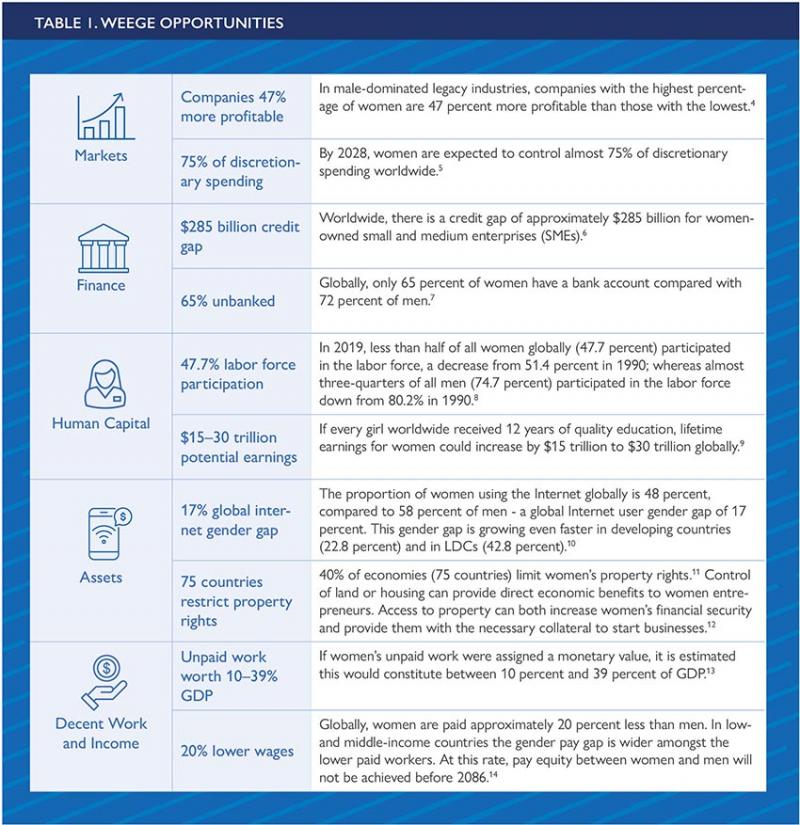 For additional facts and figures about WEEGE, refer to Resource 1: Data Sources which provides a list of relevant sources for gender-related data.