Studying the Past, Looking to the Future | Let a Thousand Flowers Bloom: The Implementation Grant Program

By Anicca Jansen, with data prepared by Aaron Chaftez

Anicca Jansen was a member of USAID's Office of Microenterprise Development from its launch in 1994 until her retirement from government service in June 2013. During that time she managed and monitored several Implementation Grant Program grants which supported the development of microfinance institutions. With a heavy focus on Africa and Haiti in the early years, her work later expanded to Eastern Europe, Haiti, and the Mideast. From 2001 to 2004 Anicca served as USAID's West Africa Regional Technical Advisor for Microenterprise and Microfinance.

With evidence from the USAID “Maximizing Outreach” study and other sources, the IGP moved forward with the confidence that low-income people could be reached with microfinance services, and that the best way to ensure long-term access would be to support the establishment of financially viable providers. However, there was no consensus, or even perceived need for consensus, on what type of institutional form that provider would take, or on what type of loan methodology they would use.  The mantra of the day was “Let a Thousand Flowers Bloom.”

The IGP grants would be used to draw out and support promising microfinance approaches, knowing that some would be more successful than others. The first Request for Applications issued in 1995 cast a wide net, stating: “Types of financial service programs eligible include poverty lending, village banking, solidarity group lending, individual lending, savings mobilization, and other program methodologies that demonstrate a capability to serve the poor.” These were methodologies identified through earlier USAID projects—PISCES, ARIES, and GEMINI—and documented and described in “The New World of Microenterprise Finance.”

Successful proposals were selected based on three factors:

In order to be eligible, the awardee had to have the capacity to work in more than one country. That was because the objective of IGP was not just to build individual institutions, but also to develop and test out methodologies and approaches that would be replicated in other countries.

Eighty grants worth just over US$95 million were awarded over the 15-year lifespan of IGP. Many grantees won multiple awards through the years for their work in several countries. For example, with IGP funds, World Council of Credit Unions (WOCCU) would go on to support credit unions in Latin America, Eastern Europe, Asia, and Africa; FINCA would spread the village bank methodology through five countries in Africa and two in Latin America; and Freedom from Hunger introduced Credit with Education to Mali, Uganda, and Bolivia.  All the grants awarded from 1995 through 2004 are summarized here. 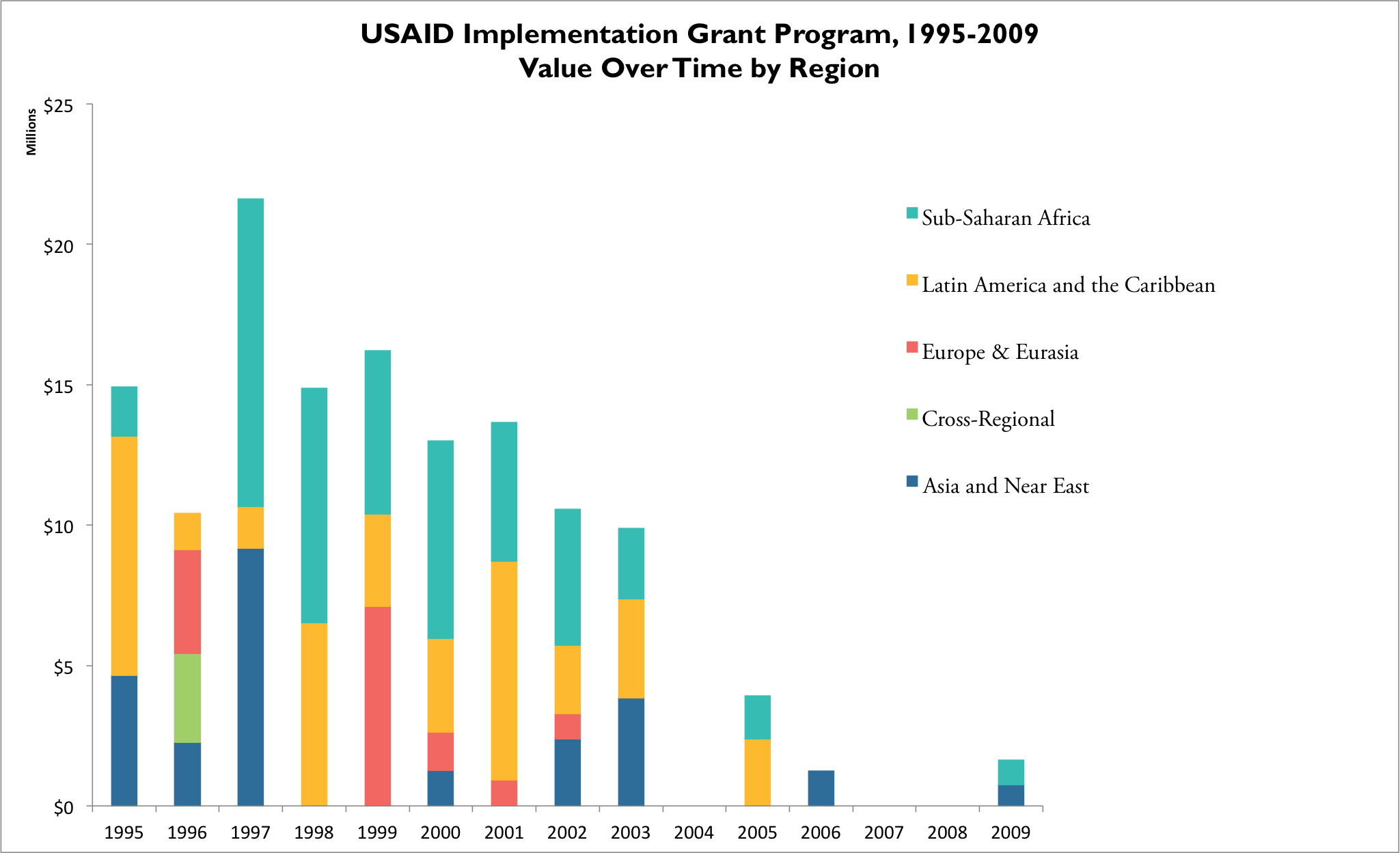 Some grants were used to help attract private-sector capital to microfinance institutions (MFIs). This began in 1995 with a US$3.5 million grant to ACCION’s International Gateway Fund, which had limited success in attracting non-donor equity investors to Latin American MFIs. In 1998, USAID awarded US$2.5 million to ACCION to support the transformation of Compartamos, a Mexican NGO, into a regulated financial institution. In April 2007, Compartamos completed an initial public offering of its stock on the Mexican stock exchange, in what was described by Rich Rosenberg, former deputy director of USAID’s Center for Economic Growth, as “a spectacular success.” In 2001, USAID awarded US$500,000 to Calmeadow to support the Africap Investment Fund. Africap’s investment capital was mostly provided by DFID. USAID funds were used primarily to fund a Technical Support Facility for development of customized support to the fund’s investees as well as provision of cross-institutional support, such as a risk management platform and Information, Communications, and Technology (ICT) innovations.  Africap went on to invest in MFIs in Ghana, Mozambique, Nigeria, Ivory Coast, Niger, South Africa, Senegal, Sierra Leone, Cameroon, Malawi, Tanzania, and Egypt.

USAID awarded two grants in 2001 to MicroRate to set up regional rating agencies in Latin America and Africa. Ratings were a way of supporting the increased flow of private-sector capital to MFIs, enabling each one to identify its weaknesses for its own improvement, and helping investors identify the better MFIs. Today MicroRate has conducted more than 650 ratings.

In the early years of the IGP, funds were provided to cover operating costs of both the international applicant as well as the local provider. In some cases, loan capital was also provided. However, as the microfinance field developed and evolved, allocation of loan capital was seen as unnecessary, and probably harmful. Instead, grantees were expected to use retained earnings, commercial loans, and investment capital to finance their loan portfolios. USAID’s earlier support for investment funds, as well as its Development Credit Authority, created in 1999 with its partial loan guarantees, provided market alternatives to donor funds. The IGP program’s peak year was 1997, when US$21,613,817 was awarded to 7 grantees. The first 5 years were the most active, with about US$78 million awarded. From 2000 to 2004, US$47 million was awarded. From 2005 to 2009, the program was winding down, with awards totaling US$7.88 million.

The final IGP grants were awarded in 2009, when three applicants—Aga Khan Foundation (Afghanistan), Habitat for Humanity (India), and Opportunity International (Ghana)—received grants to support housing microfinance efforts. When these awards closed in 2013, the Implementation Grant Program also came to its end.

Not all of the institutions supported survived or achieved their intended goals. But without a doubt, USAID’s Implementation Grant Program made a huge impact as successful methodologies and institutions flowered across the globe, achieving both replication and scale.

Did you get an IGP grant and how did it affect you?

Anicca Jansen was a member of USAID's Office of Microenterprise Development from its launch in 1994 until her retirement from government service in June 2013. During that time she managed and monitored several Implementation Grant Program grants which supported the development of microfinance institutions. With a heavy focus on Africa and Haiti in the early years, her work later expanded to Eastern Europe, Haiti, and the Mideast. From 2001 to 2004 Anicca served as USAID's West Africa Regional Technical Advisor for Microenterprise and Microfinance. - See more at: http://www.microlinks.org/studying-past-looking-future-totally-80s-supporting-missions-and-partners-field#sthash.jROaLV5z.dpuf

Studying the Past, Looking to the Future | Like Totally 80s: Supporting Missions and Partners in the Field

Studying the Past, Looking to the Future: Why Was It Called The Office of Microenterprise Development?

Studying the Past, Looking to the Future: USAID MPEP Office Blog Series

Warm greetings from USAID's Microfinance Consortium. I welcome you to our blog series, "Studying the Past, Looking to...
Blog

Studying the Past, Looking to the Future: The Road that Microfinance Built