4.3.10. Improving the Food Security of Vulnerable Populations with a Value Chain Approach

In many contexts there is significant overlap between vulnerability, poverty and food insecurity.[1] This is unsurprising, as food insecurity is typically a key contributor to vulnerability. Food insecurity exacerbates vulnerability both in the short run (e.g. inadequate food forces people to sell their productive assets) and long-run (e.g. poor nutrition creates cognitive challenges that lower career earning potential). Conversely, vulnerable populations are more prone to becoming food insecure or worsening their food security in the face of a shock, such as a crop failure, the loss of an income-earner or a sudden health crisis, and have fewer coping strategies to deal with shocks. Multiple shocks will often turn vulnerable households facing transitory food insecurity (a short-term or temporary food deficit) into chronic food insecurity (a long-term or persistent inability to meet minimum food consumption requirements), as illustrated in the graph below.[2]

Just as vulnerability varies significantly between individuals and households, so does food insecurity. Chronically food insecure households typically face a more difficult journey to food security and require greater support,[3] while the transitory food insecure need less assistance to reach food security. These variations make it impossible to prescribe interventions that are suitable for all food insecure, regardless of context. Rather, the most appropriate strategies will be contextualized and offer opportunities for beneficiaries at different stages of vulnerability.

In working with the most vulnerable and food insecure, most implementing agencies have provided or linked to temporary and long-term safety nets that support basic survival. Cash transfers, for example, have been found to promote food security in contexts where markets function well.[4] Public works programs are also effective under certain conditions.[5] In some cases, these programs have been designed to support longer-term economic recovery. Several mechanisms are being tried:

As households rebuild their productive assets and risk tolerance, they will become increasingly able to engage in other activities that advance their food security. Creating incentives for households to graduate from direct assistance is one promising practice, although with mixed adoption among practitioners. The Global Food Crisis Response Program introduced a series opportunities that households could engage in, as illustrated in the figure below.[7] 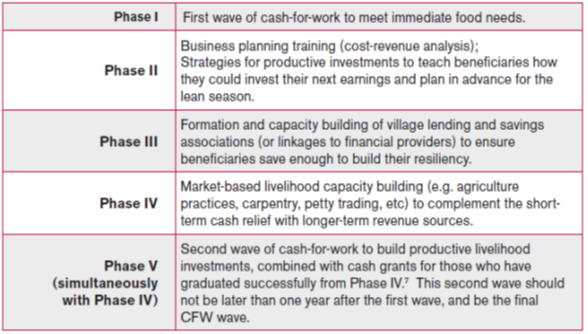