Integrate nutrition into value chain selection. Value chain programs that aim to improve utilization should include nutrition considerations in the value chain selection criteria. In many cases, utilization can be most effectively addressed by targeting the foods the poor consume or produce.[1] For example, the Wellness and Agriculture for Life Advancement (WALA) project included the impact on household food security and nutrition as one of its ten selection criteria. It incorporated findings of the team’s nutrition specialists on the nutritional gaps, as well as information collected by the agribusiness team on which crops were the most competitive and had the greatest potential for market growth. As a result, the project identified pigeon peas, cow peas and groundnuts as crops that met both market and nutritional objectives. Pigeon peas, for example, are largely consumed in the south of Malawi but a majority of farmers have not traditionally grown sufficient quantity to sell. WALA is supporting farmers to increase their productivity and, though increased production, expect to benefit household nutrition. 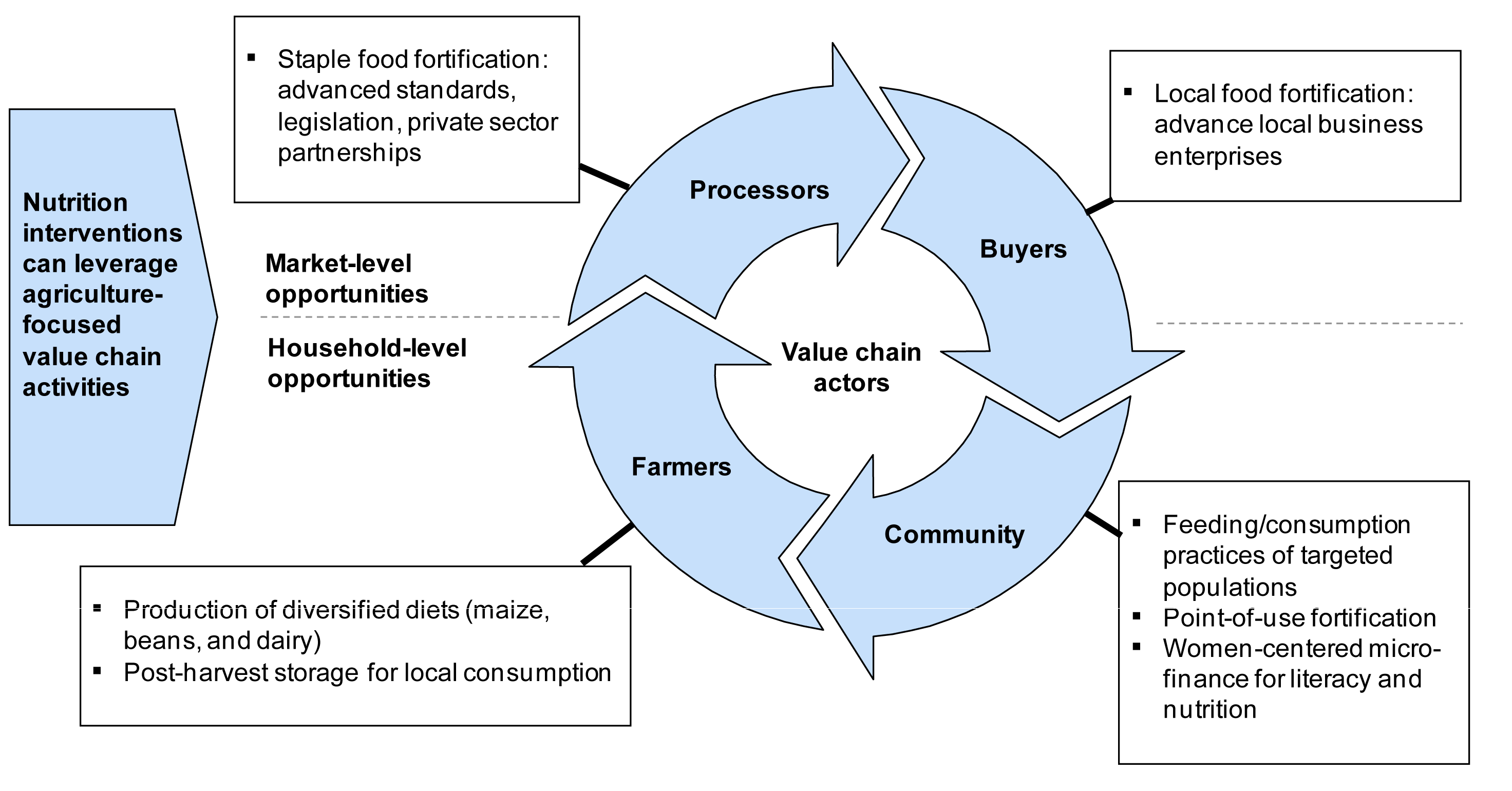 Another example is the International Food Policy Research Institute (IFPRI), which is conducting a nutrition-sensitive value chain analysis in Indonesia. While the VCA is being conducted over multiple years, many of its methods are relevant to shorter studies. The VCA is investigating the implications of shifting consumer demand for four high-value agricultural commodities on the nutritional status of consumers. Research is involving actors throughout the value chain. Surveys with producer, traders and processors are examining the incentives to maintain quality of the commodities as well as actual practices. Research at the consumer level is looking at the status and drivers of household diets, the proportion of food being sourced from supermarkets versus traditional sources, and anthropometric health indicators among family members.[4]

Analyze the implications of project design on nutrition. The decisions that are made in the design and implementation stages of the value chain project cycle will often have significant nutritional implications. Projects that do not consciously consider the nutritional impacts of programming decision can cause negative outcomes. One tool for addressing this is the Nutritional Impact Assessment Tool, created by the Infant and Young Child Nutrition project. The assessment tool guides implementers in assessing the potential implications of their interventions on nutritionally-sensitive groups.

Diversify diets. Individuals need to consume a diversified diet to ensure adequate amounts of different nutrients.[5] There is a risk that the value chain approach may inadvertently have a negative effect if it is applied to a single value chain. However, implementers can use the approach to address a lack of dietary diversification with the following interventions:

Promote mixed allocation of production increases. Promoting the mixed allocation of increased food production to consumption and sale supports both improved nutrition and higher incomes. A Land O’ Lakes project in Zambia advised farmers to sell the milk harvested in the morning, while consuming the milk harvested at night. The increase in milk consumption among households that participated in the project and received a heifer is significantly higher (70%) than in those households that did not engaged in the project (31%).[9]

Leverage relationships to improve household nutrition practices. Value chain initiatives that wish to improve food utilization will need to consider how they can leverage tools like behavior change communication and nutritional counseling to reach households and the individuals within them, particularly if they are otherwise not working at these levels. Leveraging value chain relationships, such as those that exist between farmers and extension officers or millers, is one approach to delivering nutritional messages directly to households. TechnoServe's initiative with female-operated millers in Mozambique, for instance, envisions the mills ultimately becoming a hub for disseminating nutritional messaging to local populations that is embedded in sales transactions.[10]

Support nutrition-sensitive processing upgrading. Upgrading the food processors that supply consumers with their milled or processed products offers significant scope to improve utilization at scale in areas where the poor are purchasing – rather than growing – a significant portion of their caloric intake. In Tanzania, where the negative effects of vitamin deficiencies are estimated to cost over two percent of GDP, food fortification has the potential to reach over 30 million consumers, or approximately three quarters of the population.[11] A USAID-funded Global Development Alliance called the the African Alliance for Improved Food Processing and managed by TechnoServe in partnership with General Mills is working to develop new solutions. It is improving the technical capacity and commercial viability of small and medium-scale food processors in Sub-Saharan Africa to fortify selected basic grains and to produce food products targeted at both at commercial markets and specifically to vulnerable populations. The Alliance is working directly with processors in collaboration with development partners and the support of USAID funding.[12] To take the model to scale, General Mills has created Partners In Food Solutions, a non-profit entity that will replicate the approach. Two other international food processing companies, Cargill and DSM, have also joined as initial corporate members.

Identify win-win opportunities to enhance food safety and value chain efficiency. Improving food safety is not always negative for small-scale producers; it can often improve nutrition levels while producing reduced waste and improved returns for value chain actors. Mercy Corps Indonesia's Value Initiative Program (VIP) has simultaneously improved food safety and firm profitability through its work in the tofu and tempe value chains. Selected for their widespread consumption among Jakarta consumers including the urban poor, both foods have high protein and nutrient content but are often produced and prepared under unhealthy conditions. VIP used various interventions to improve nutritional content, at multiple stages of the value chain. New technology was introduced at factories that improved production efficiency by 30% while also improving product cleanliness. A new cooking stove was piloted with street vendors that burns used cooking oil. Creating alternate use for the oil reduces incentives for operators to reuse oil for cooking, thereby creating health benefits for consumers. Finally, the program has increased awareness and usage of an existing government loan facility that lends for clean production upgrades.[13]