A good first step in changing informal rules is to analyze which norms are beneficial and which are not. SDCAsia has had success in involving community members in a process to build on the best norms and discard the not-so-good norms. To promote the implementation of Good Agricultural Practices (GAP) standards for Cardava banana farming, SDCAsia needed to change the norms of how farmers typically manage their Cardava farms. The B-ACE project conducted a series of round table discussions with representatives from farmers, traders, processors/exporters, government agricultural extension workers, commercial plantation managers and input suppliers. The stakeholders collectively identified best and not-so-good practices including:

Generic templates from previously drafted GAP facilitated by SDCAsia for other crops were presented as reference/benchmarking parallel to identifying the not-so-good aspects of implementing GAP. Through this process, producers developed a sense of ownership of the implementation measures and to a significant extent aligned informal norms with Good Agriculture Practices, which helped reduce the sense of outwardly imposed requirements. Immediate benefits included lower transaction costs, as traders and processors had less rejected produce, as well as a significant reduction of conflicts caused by differing understandings and interpretations of standards.

Steps for using this method are as follows:

When developing strategies for change in social institutions, it is essential to determine the barriers to and drivers of change. Barriers to change—both external and internal (personal)—discourage people from taking an action they otherwise would. External barriers to change may include:

Personal barriers may include:

These barriers can be minimized by reducing costs, expanding distribution, providing adequate information, and improving communication and other systems. Analyzing the barriers to change is also useful in drawing up a strategic change plan and assessing the feasibility of change.

Communicating the Change Agenda through Comics

Research indicates that pure information campaigns have minimal effect on changing behavior. Having a high level of awareness of food contamination and the importance of personal hygiene does not necessarily translate into a concern or taking personal action. Information, however, is important for communicating that a problem exists, that there is a practical solution, and to assist in identifying the costs of inaction and benefits of taking action. Paying attention to how the information is presented can improve its effectiveness. People are more likely to pay attention to information that is: 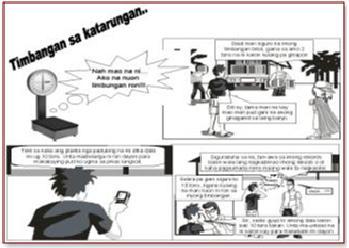 Based on the above, SDCAsia has increasingly used comics as a means of incorporating the development messages into entertaining formats that communities enjoy reading or watching. Comics allow sensitive topics that otherwise may be avoided to be treated in a nonthreatening way and spark dialogues that facilitated self-realization. A few tips on preparing comics are as follows:

Informal rules are typically enforced through community feedback mechanisms that maintain compliance. It is essential to understand the underlying driver of a rule, what its social benefits are and the various feedback mechanisms used for enforcement. Individualism (for example, early adoption of new crops/technologies) comes into conflict with informal rules in many cultures, so it is important to explore methods of resolving these tensions. One way to address this is for early adopters to access easy investment or upgrading options, but in a way that is open and provides incremental steps for other community members to see the progression as obtainable. This limits the potential for resentment against early adopters since the process of upgrading is viewed as more open and accessible. [1]

It is often important to address the feedback mechanisms that communities use to enforce norms against individualism. For example, where informal rules require extra earned income to be shared with other members of the family, one might push to create localized jobs like input agents and spraying services. This starts a process whereby requests for cash (that cannot be denied) can be defined around transactions for a service or product. Alternatively, one can track farmers’ cash-flow and encourage upgrading investments that capture the cash immediately, before the farmer is faced with the dilemma of honoring requests from community members. ACDI/VOCA did this in Ghana by encouraging input firms to organize promotional events for inputs for the coming season at the same time as harvest sales.[2]

Sometimes the best solutions are ones that avoid challenging deeply entrenched informal rules, or undermining positive aspects of them. For example, in communities that place a high social value on livestock, a "two herds" solution may resolve the conflict between social and commercial values. In general, practitioners should ensure that the process of innovation (of new crops, technologies, etc.) is as inclusive, transparent and incremental as possible—so that early adopters stand out less from the crowd.