Participant observation is a qualitative method with roots in traditional ethnographic research. It seeks to understand the multiple perspectives within any given community and the interplay among them. Researchers accomplish this through observation alone or by both observing and participating, to varying degrees, in the study community’s daily activities. Participant observation always takes place in community settings, in locations believed to have some relevance to the research questions. The method is distinctive because the researcher approaches participants in their own environment rather than having the participants come to the researcher. Generally speaking, the researcher tries to learn what life is like for an “insider” while remaining, inevitably, an “outsider.” This methodology is described in Qualitative Research Methods: a data collectors' field guide published by Family Health International.[1]

A qualitative method called institutional ethnography[2] can be used to understand informal regulation in markets. Originally developed for a more formal institutional environment (e.g., European health/education systems), this method follows paper trails to enable analysis of power relations. Institutional ethnography looks at what forms get filled, who fills them, and which forms define decisions. Even in less formal contexts, where the forms are few and far between, this method provides a useful starting point to look at power relations in markets. Example findings from recent research include the following:

Participatory methods and tools have been used by development practitioners around the world for many years as a way of helping communities to identify and prioritize their own needs. Some practitioners have applied this directly to value chain development. For example, Practical Action has used participatory approaches to involve all the key actors in a value chain in identifying opportunities and constraints, including informal rules in the business environment.[3] By encouraging market actors to identify key issues themselves, practitioners can avoid imposing their own interpretation of what the behaviors they observe mean. Further, an essential feature of this kind of facilitative (light touch) approach is that activities empower socially marginalized actors to participate effectively in the analysis and negotiation.

Even after constraints are defined, it can be difficult for the project staff and stakeholders to think beyond the readily apparent effects of a problem to the deeper issues—such as social norms—that underlie those effects. If a project addresses only the obvious symptoms of a constraint, its impact is likely to be limited. The "Why Exercise" developed by SDCAsia is a relatively simple tool for shifting thinking to the root cause of a problem.

Steps in this exercise are as follows: 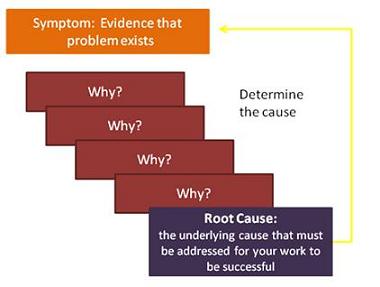 The exercise is complete when participants have agreed on an overall analysis of the constraints, identified information gaps, and identified key root causes that need specific attention.

Effective interventions require identification and analysis of the individuals or groups with a stake in or the ability to impact the process. SDCAsia's analysis of social influencers also involves assessing the dependency and power of different stakeholders in relation to a particular group of players and developing a strategy to manage these stakeholders.

This analysis can be conducted by the project staff or with the stakeholders themselves. The main objective is to facilitate the identification of people that would support or hinder project efforts to fully address a constraint. In many cases, the results of the stakeholder analysis at one level lead to another group of stakeholders in the next link of the chain that must also change their behaviors so as to effect change in the target groups. In other words, one has to identify the chain of stakeholders in the change process.

The steps involved in this analysis are as follows:

This information is usually best obtained through informal interviews, rather than in workshops. This exercise is very helpful for both identifying potential change catalysts and developing a communication strategy for reaching actors with different interests.

Analyzing the current behaviors of men and women offers a window for identifying gender-based constraints to upgrading, and approaches to promoting upgrading activities that are inclusive of and benefit both men and women. A set of tools developed under the FIELD-Support project can help project staff and researchers integrate a behavior change perspective into value chain analysis and use the results of the research to design programs that more effectively integrate gender considerations.[4]