4.2.6. Key Constraints and Promising Strategies in Applying the Value Chain Approach with the Very Poor

Key constraints and promising strategies in applying the value chain approach with the very poor include:

The very poor lack assets and resources relative to others in their communities. They are often less able to access services to help them increase those resources, such as credit. This is true even of microfinance institutions (MFIs); the Consultative Group to Assist the Poor (CGAP) found that "[w]ith rare exceptions, even MFIs dedicated to reaching very poor populations fall short of reaching those at the very bottom."[1]Explanatory factors include lack of collateral, exclusion from other members who view the poor as poor credit risks, the unwillingness of most MFIs to lend to start-ups, and a lack of other non-financial support services (e.g. technical knowledge, market linkages). Non-physical assets such as social relationships, skills and education are often equally important constraints faced by very poor populations. Illiteracy and innumeracy, for instance, are often strong barriers to accessing services and information. Potential strategies to address limited capacity and resources include the following: 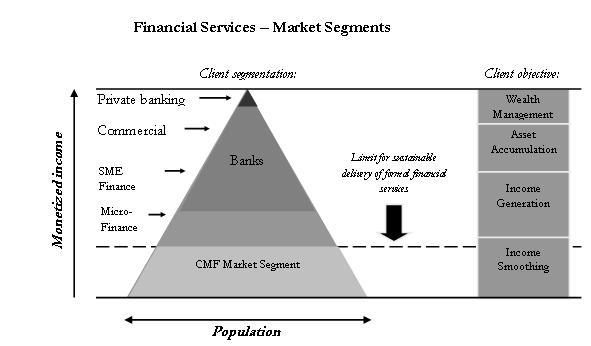 Catholic Relief Services (CRS) in Tanzania used this approach by encouraging chick pea farmers to first form small savings groups. These groups accumulated small amounts of capital that was then lent out among group members. Once these groups were well functioning, they were used as platforms for negotiating group sales contracts directly with exporters for higher prices and better terms. A case study of this project found that in comparison with conventional marketing groups that had been created by other NGOs, CRS’s strategy of integrating group asset mobilization into the marketing structure created greater group cohesion. It also increased the participation of poor community members, who had traditionally not participated in joint marketing structures given a need for immediately cash at harvest and an inability to delay sale to access better prices.[7]

Given limited capacity to jeopardize existing assets and consumption patterns, very poor populations will often prioritize strategies that mitigate risk rather than maximize income, and will prefer a diversification of income streams over specialization in one higher return activity. Opportunities with longer payback periods or slower capital rotation are thus much more risky and less likely to be adopted by very poor populations, as investments horizons are often quite short. Empirical evidence backs the correlation between household wealth and willingness to assume risk.[9] Potential strategies to mitigate this risk aversion include the following: 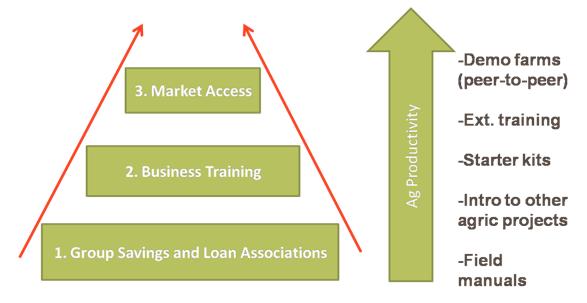 The very poor tend to face greater difficulty in accessing health, education, water and other basic services. Cost, distance and poor quality are common barriers. These deficiencies increase the likelihood of negative outcomes (e.g., poor nutrition, illness) that limit the capacity of very poor populations to sustainably engage with value chains. Poor access to water, for instance, can occupy many hours of the day that could otherwise be used for productive purposes. Poor quality health care and sanitation systems increase the portion of the year that is lost to preventable illnesses that lower crop yields and employment earnings. In many cases access constraints have macro-level effects; inadequate protection from malaria, for instance, has a demonstrated impact not only upon the economic outcomes of individuals and also on the aggregate growth levels of affected countries.[13] Potential strategies to mitigate these constraints include the following: