This post was authored by William M Butterfield, the Entrepreneurial Environment Team Leader in the Center for Economics and Market Development at USAID in Washington.

USAID is excited to start implementing the new 2021 Economic Growth Policy. Today I will introduce the Policy’s framework and discuss how it applies a market systems perspective to enterprise-driven development. Market systems are complex, adaptive networks that consist of multiple interdependent firms, workers, consumers, as well as formal and informal institutions. When they function well, actors face incentives to positively support the growth process. However, various constraints can prevent market systems from functioning efficiently and generating inclusive, sustained, and resilient economic growth. This idea underscores a key theme of the EG Policy Framework (see Figure below).  Economic analysis is critical for understanding market systems. USAID’s goal is to increase the share of its programs informed by quality economic analysis, allowing us to play a facilitative role in improving market systems in our partner countries so that private investment increases, accelerating growth.

Figure: USAID’s Framework for Economic Growth - Economies are a system with enterprises at the center 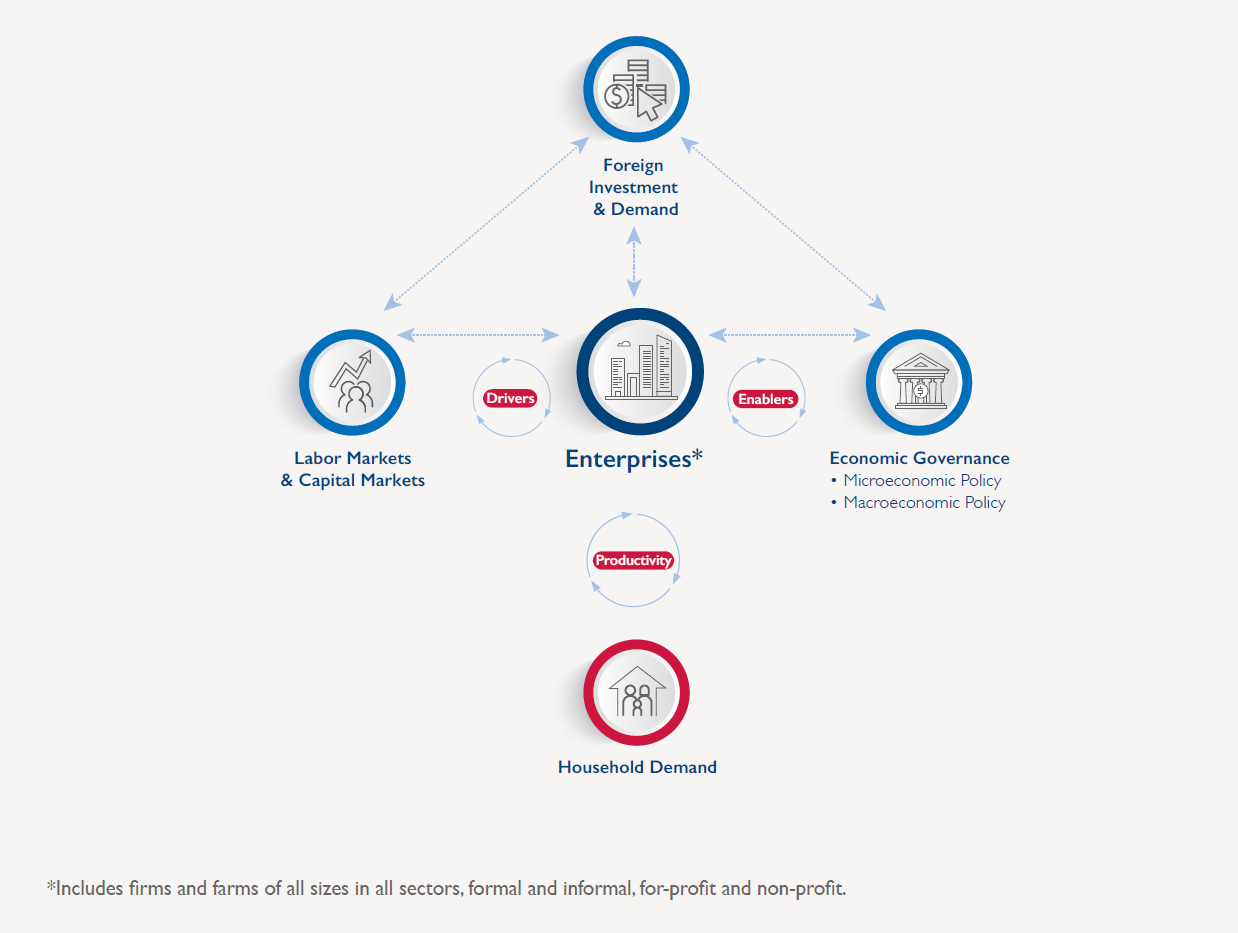 Enterprises often cannot or will not make investments on their own - market failures, lack of market systems resilience, and lack of complementary public investment create high transaction costs that reduce incentives for continued investments that increase productivity.  Economic governance (center right in the Framework) is the set of policies, laws, and regulations combined with public investment decisions and how they are implemented by formal and informal institutions to produce the enabling conditions for continued investment by enterprises.

A virtuous cycle can take hold within market systems, causing economic growth to accelerate beyond trend rates.  Increasing productivity translates into better jobs and higher wages for workers, resulting in increased incomes for households.  This generates demand for further investment by enterprises.  It also generates demand for — and the tax revenue needed for — improved governance, further incentivizing domestic and foreign investment, human capital and technology acquisition, and economic growth.

Yet a vicious cycle also could result. Market failures mean that constraints in one area of the system can reduce the incentives for individual enterprises to invest, even though such investment would result in high returns for the system as a whole.  This has repercussions for other sectors of the economy and can result in an equilibrium of slow growth.

Given these interdependent relationships between almost all the variables that influence enterprises in the economic system, it is very difficult to pinpoint what is a cause of growth, what is an effect of growth, and which indicators are merely symptoms of low demand and underdevelopment.

In the long run, we know that improvements in policy through best-practice reforms eventually lead to improvements in growth rates across countries.  Yet while economic reform is a statistically significant predictor of growth accelerations that are sustained, economic take-offs that rapidly increase income and reduce poverty are highly unpredictable.  Similarly, while higher levels of institutional quality are strongly associated with higher levels of income per capita, they are not very well correlated with short to medium term economic growth.

Systems-based models like the EG Policy Framework highlight that the relationship between most development indicators and economic growth is not linear.  Rather, economic performance and development are state-dependent and defined by the unique situation -- the interconnected constraints and opportunities -- of an individual country and local market systems.  This is why economic analysis, such as growth diagnostics, employment diagnostics, political economy analysis, Problem Driven Iterative Adaptation, and Country Economic Reviews, is so important.

USAID’s goal is to have 75 percent of our EG programming informed by quality economic analysis within the next five years.  By analyzing local market systems, we can gain a better sense of how our interventions might modify the incentives and behaviors of enterprises and other market players to speed up growth through increased productive investment.  This will help USAID achieve inclusive, sustainable, and resilient growth that is mutually beneficial for our partner countries and American economic and political interests.

How has economic analysis improved development assistance in the countries where we work?  How has a lack of analysis led to suboptimal results?

In my next post of the series, I will share how the EG Policy establishes principles for programmatic impact, and how you can help us start implementing it. Stay tuned!

Preparing for the Next Disaster: Partnering with the Local Private Sector for Sustainable Results

Migration from Latin America and the Caribbean: Drivers and Policy Responses