This post was written by Ellie Wong and Tamam Noor, World Vision Australia and was originally published on the Vikāra Institute's website.

Increasingly, it is understood that for a market system to be healthy, it needs to be inclusive and integrate as many varied parts of society as possible. Through this participation of more and more diverse people in a market system, the system can more effectively adapt and innovate in response to various threats and opportunities. The blog presents World Vision’s efforts to improve the inclusivity of market systems with a specific focus on female participation. As the blog indicates, social norms often result in invalid perceptions, such as women being inferior farmers. MSD programs are using research to uncover these misperceptions and demonstrate to market actors the value of engaging previously disadvantaged groups. As the blog also indicates, social norms related to gender are typically slower-moving variables that are unlikely to change solely due to a market actor selling more inputs to women customers. As such, tracking changes in social norms as part of systems change objectives is emerging as an essential element in MSD approaches. MSS2022 will be exploring how MSD practitioners are developing innovative interventions, frameworks, etc., to improve their ability to catalyze greater inclusivity. 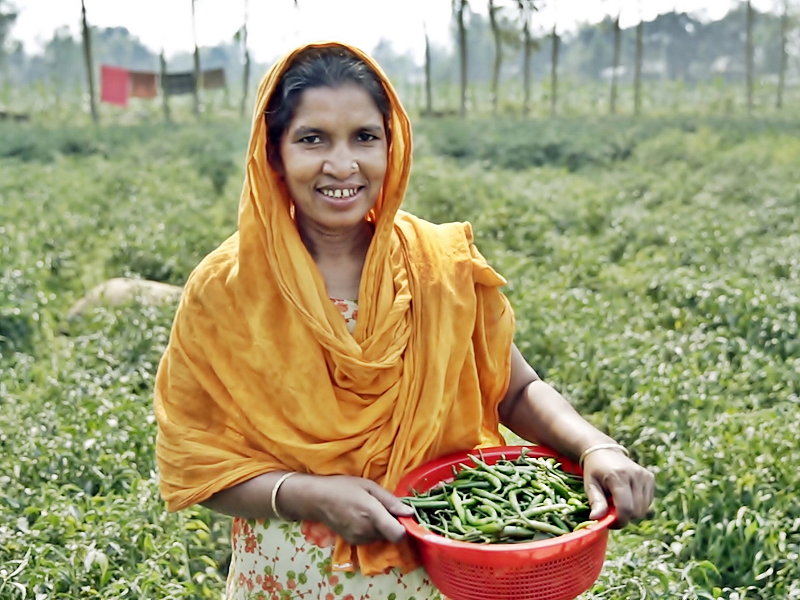 “We [had] difficulties getting quality seed. That’s why I had no good crops. I learnt these things from the project. [Now] we purchase seeds collectively and do farming as a group.” – Monjuri – Chili producer, NSVC project (World Vision International 2021).

As World Vision looks at scaling the organization’s approaches to inclusive MSD and apply our WEE new framework, we are continuing to test and learn. While each program and context is different, three key lessons are emerging on how to promote inclusion and WEE outcomes.

1. Build the productive capacity of vulnerable groups to catalyze their sustainable participation in market systems.

Across the globe, World Vision works with smallholder producers, rural and urban households living close to the poverty line. We are often working in thin markets where there are not enough providers in a public or private market for it to function as intended. We often operate in fragile contexts, where programs are transitioning from humanitarian aid to long-term development programming.

Our iMSD approach promotes market systems change that includes poor and marginalized groups, while also strengthening their productive capacity to participate and benefit from market systems. We work through market actors on inclusive business models that engage poor women and men as producers, employees, and consumers. However, to catalyze inclusion outcomes, when there are no appropriate partners, World Vision also integrates household interventions like skills development, knowledge transfer and market linkages.

However, to make the business case for suppliers to expand their operations to a remote location, the project did market facilitation to support producer groups to increase their productive capacity so companies would be more incentivized to engage them. This included helping establish Community Sales Agents (CSAs) to collectively buy and sell rice, maize, vegetable, and chili products, business, and financial literacy training, as well as links to agri-extension services. This has helped to create economies of scale, and farmers’ production yields. As a result of this two-pronged approach, there has been a 67% increase in gross revenue amongst 20,000 households by the project’s mid-term.

World Vision’s new holistic WEE Framework has four key domains: economic advancement, access, agency, and equitable systems. Equitable systems means that formal systems – like laws and policies – and informal systems – like social norms – provide a supportive environment where women can thrive alongside men. Promoting inclusive outcomes is about good design. If WEE is a program goal from the beginning, this can ensure intentional pathways to multiple WEE domains.

Opportunities for WEE should be a key criterion in the selection of the value chain and design of project interventions. At this point, it’s critical to strengthen the project team’s understanding of how applying a gender lens can help in better understanding systemic constraints, rather than a "trick the box" exercise. Women are already participating in agri-foods market systems – although often invisible and under-recognized. How can programs understand these systems if they don’t understand the specific barriers faced by women?

In the NSVC project, WEE was a key objective and highly weighted in the selection and intervention criteria alongside growth potential and others. For example, chili was selected as one of the key value chains with opportunities for women as it was close to the home, had low entry barriers in terms of land and input costs, with value addition opportunities in post-harvest processing. 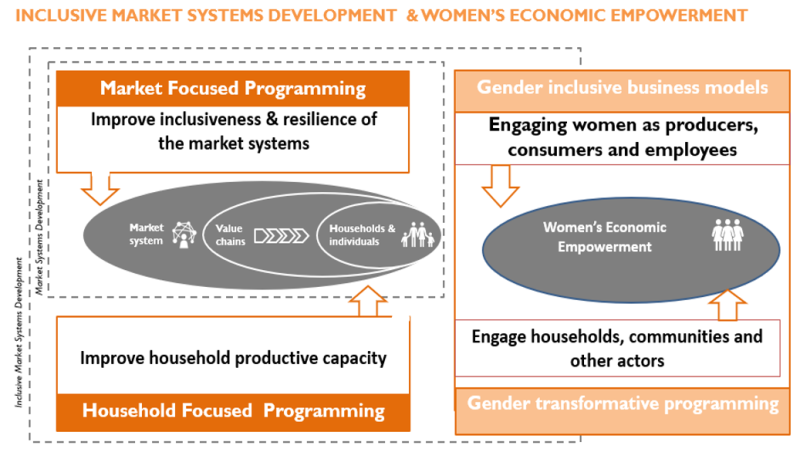 To achieve WEE outcomes the project adopted a two-prong approach. First, NSVC saw an opportunity for the agribusinesses to reach women, as a new customer segment.

However, a key challenge was that women were not seen as reliable customers of producers. World Vision’s assessments (2018) found common perceptions like "If women go to agricultural land, crop production will be less." Initially, private sector partners were reluctant to engage with women-only producer groups, fearing that they were not the key decision makers. However, over time, the project is convincing them that women could be reliable customers for agri-inputs seeds.

Second, to get to the point where private sector were incentivized to deal with women, the project needed to remove specific gender-based constraints, by directly engaging households, communities, and other actors. For example, to increase women’s access, efforts were made to strengthen women’s soft skills and confidence with women role models and additional mentoring support for women producer group leaders. To increase women’s agency and equitable systems, NSVC integrated gender transformative programming, which actively challenged unequal gender relations and norms and replaced them with equitable alternatives. World Vision worked with Promundo to adapt their Mencare approach, which promotes gender equitable relations with couples, including sharing decision-making and male engagement in the care work.

NSVC also implemented a Gender inclusive financial literacy training (GIFT) package, which not only promotes access to financial management skills but also women’s financial decision making alongside men. This has been complemented by community-level social norm change interventions, including folk songs, male champions, and community dialogues. Key to this work has been a staged approach that has worked on easier norms first, before addressing more challenging norms over time. 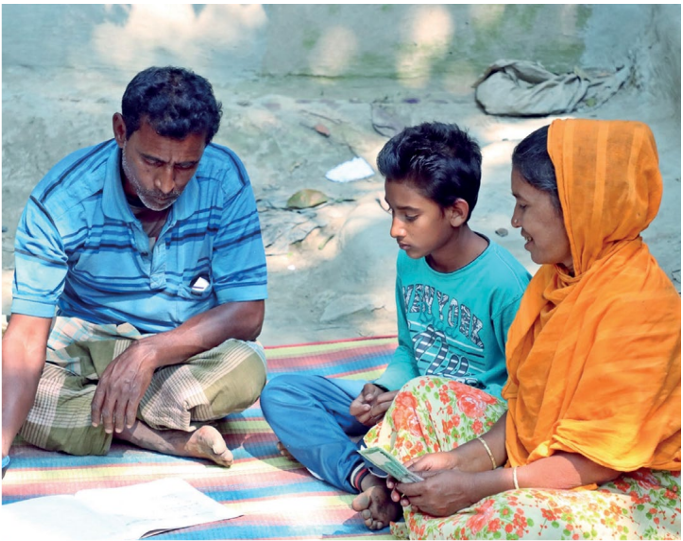 “I am happy with my family now. After selling chili, I consult with my wife about what can be done with this money.” - Mohammad, Mencare participant, NSVC project with his wife Monjuri and their son. (World Vision International 2021)

Many MSD programs make the business case for gender equality with the private sector to improve women’s access to new opportunities products, services, or resources. They tackle the issue of social norms indirectly by shifting perceptions on the role of women as economic actors. This work is critical.

However, intentionally programming to promote women’s agency and positive social norms in partnership with households, communities and other actors is also key. Household and communities might be driven by other incentives. For example, in NSVC, community leaders and households were motivated overall benefits to the well-being of communities, families and children, which can be achieved by economically empowering women alongside men.

There is also merit in considering what the risks are to sustainability when social norms are ignored by programs or seen as ‘too difficult’? Indeed, what are the missed opportunities when communities and other actors are not viewed as sources of inclusion and resilience in market systems?

In other parts of Bangladesh, in some projects, evidence shows women’s empowerment impacts that did not last. For example, women returning to domestic work only after the end of the project, transferring assets to either their husbands or sons. This was likely because there was not the supportive environment for them to thrive and succeed.

Half-way through the NSVC project, there has been strong progress across WEE domains. These results coupled with integrated nutrition activities, has also seen strong results in child nutrition. Key to the project’s success has been the incentives for market actors to engage marginal farmers especially women. For example, increased sales volumes have continued to drive Petrochem’s investment in strengthening their input distribution network in Jamalpur, including through staff time and demo-plots. Women’s agency – particularly decision making over the purchasing of agri-inputs – has been key to the notion that women can be reliable customers.

As well as focusing on economic incentives, to promote sustainability, the project will continue to promote women’s agency and supportive gender norms in partnership with actors that can continue this work after the project’s end, including government agencies, religious and community leaders. This is based on the premise that communities and other actors can be powerful sources of inclusion and resilience within market systems when we find the right incentives to engage them. By promoting inter-related economic and social incentives, we can sustainably catalyze WEE outcomes in more inclusive market systems.

You can also read more about the World Vision’s approach and programs in first and second instalments of Marketlinks’ Market Corner for March 2022, which focused on the care economy.

AgChain Hackathon: The Future of Food Security and Agriculture