We set out to conduct a simple demonstration of the relationship between economic growth and the purchases of American exports and tie it to best practices in foreign assistance.

The 2021 Interim Security Strategy (INSS) of the United States asserts:

When we invest in the economic development of countries, we create new markets for our products and reduce the likelihood of instability, violence, and mass migrations.

Are these claims true?  How is the economic development of countries associated with the creation of new markets for American exports?

Our analysis[1]  estimated an income elasticity of .78 for U.S. imports in our sample of developing countries, statistically significant at well above the 95 percent confidence level. The interpretation of this result is that for every 10 percent increase in their real GDP per capita, developing countries’ imports from the U.S. increased by 7.8 percent on average.  That means when developing countries grow, Americans benefit.  We also ran several robustness checks on this result, including changing the decade of consideration, which continued to show a very strong, almost one-to-one relationship between income growth and the growth of purchases of American products.  This relationship is displayed graphically below. 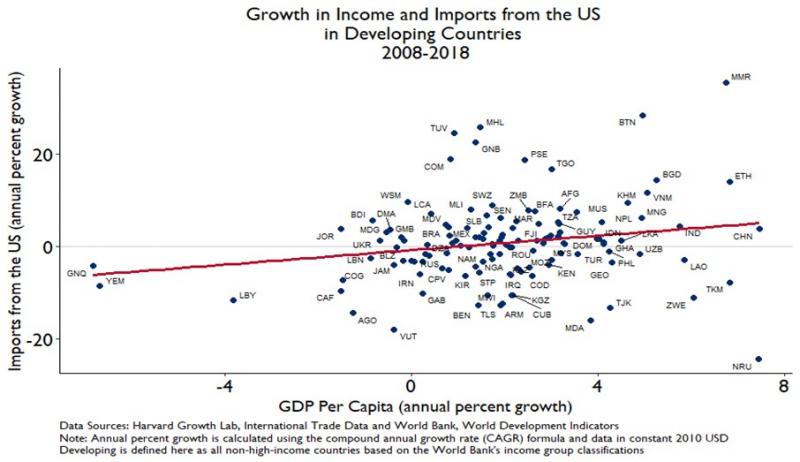 It is clear that growing incomes in developing countries is in our shared interest, so how does foreign assistance support this objective? The sixth principle of USAID’s Economic Growth (EG) Policy states that USAID's EG programs must benefit or show the strong potential to benefit the American people and promote American economic prosperity.  USAID’s programs can meet this requirement when they help enable more inclusive, sustainable, and resilient economic growth in our partner countries.

Earlier studies demonstrated that USAID’s support for Trade Capacity Building (TCB) is effective at increasing exports and economic growth in our partner countries, even after controlling for a wide range of factors.  The evaluation found that there is a direct and measurable impact of USAID TCB projects on common economic growth indicators such as jobs created, household incomes improved, and increased private sector revenues.

Take just one example to illustrate this case: Vietnam.  A recent Trade Capacity Building Case Study (internal to USAID) shows that a relatively small amount of U.S. foreign assistance for TCB can yield outsized results for economic growth, development, and poverty reduction.  That support, encompassing 49 projects and $95 million in funding since 2002, through cooperation with the Vietnamese government and private sector partners, provided technical assistance that has improved ease of doing business in Vietnam, for both foreign and domestic firms.  According to the World Bank’s Doing Business indicators, for “Trading Across Borders,” Vietnam has reduced the average time to export from 22 days in 2010 to just over four days in 2020, while reducing the time to import from 21 days to five and a half days over the same period.  Since 2002, Vietnam has grown from the 65th ($580 million) to the 28th biggest market ($10.8 billion) for U.S. exports in 2019.

Scaling Up the Mutual Benefits

The large differences in per-capita income across countries mostly reflect economy-wide differences in productivity—defined as the value of output divided by the cost of production, or the ability to produce more with less.  If we want to increase local enterprise productivity in the countries where we work, we should first be asking ourselves how we can create stronger connections with American enterprises - the most productive enterprises in the world.  With USAID’s Private Sector Engagement Policy as our guide, we should be expanding our collaborative partnerships with U.S. firms that simultaneously support our development objectives by building local firm productivity, as well as expanding American commercial interests. Working with our State Department, Foreign Commercial Service, and Foreign Agricultural Service colleagues where possible, we should constantly be looking for ways to facilitate investment opportunities for U.S. firms, either by working on specific deals or improving the general investment climate.

American goods and services are the highest quality and most sought after in the world.  When people in developing countries earn more income, one of the first things they do is buy American products.  As the development community, let’s think more about how to leverage this relationship between the growth in income in developing countries and their purchases of American goods and services through well targeted foreign assistance.  When we focus our foreign assistance efforts at increasing inclusive, sustainable, and resilient economic growth, we can rest assured that American businesses, and ultimately the American middle class, will share in the benefits.

[1]We defined our sample of developing countries as all low and middle income countries perin the World Bank’s income groupings. We identified the Growth Lab at Harvard’s international trade data for 2008-2018 as the best dataset to maximize both country coverage and data quality for our sample. Due to limitations on the availability of data on trade in services, we restricted our analysis to only trade in goods.

We chose GDP per capita from the World Bank’s development indicator database as our indicator for income, and pulled U.S. consumer price index data from the same source to convert the trade data into constant 2010 USD. Our final sample of developing countries with available data totaled 129. We then calculated the annual growth rates for GDP per capita and imports from the US from 2008-2018 using the compound annual growth rate (CAGR) formula. We input this calculated data into an Ordinary Least Squares (OLS) regression model to estimate the relationship between income growth and growth in imports from the US across the ten-year period.

"Value Chain Development and the Poor: Promise, Delivery and Opportunities for Impact at Scale"

The Market Corner: Applying a Systems Approach to e-Business