Levine opened the presentation by outlining the definition of resilience adopted by Mercy Corps: “the capacity of communities in complex socio-ecological systems to learn, cope, adapt, and transform in the face of shocks and stresses.” He then introduced Mercy Corps’ resilience framework, which focuses on answering four crucial resilience questions as well as three critical capacities:

The fourth resilience question relates to the three aforementioned capacities. Approaches a population may use to increase resilience can be realized through building (1) absorbative capacity, or the ability to cope with a short-term stress; (2) adaptive capacity, which is the medium-term ability to be flexible; or (3) transformative capacity, which is the long-term role that institutions -- formal and informal -- and policies have to help communities manage well-being during shocks. Once the questions and capacities have been addressed, the STRESS (Strategic Resilience Assessments) process is used to analyze systems and assess community capacity at the program and country level.

Muench then elaborated on the broad framework that Levine laid out by providing case studies of projects implemented by Mercy Corps. First, she explained the case of RAIN Uganda, a project which aimed to increase farmer incomes and food security by encouraging farmers to grow sesame, a high-value crop. While this project was indeed successful in encouraging more farmers to grow sesame, increasing farmer incomes, and even in helping to create a farmers’ association, it did not lead to increased food security or better nutrition outcomes.

Why would this be? Well, researchers found that farmers were instead spending their money on assets and equipment rather than better food. Farmers were also replacing staple crop production with sesame production, leading to an over-reliance on sesame and therefore leaving farmers more susceptible to a single market shock. Essentially, long-term resilience was declining in many cases, and thus focusing only on market systems development did not inherently lead to resilience gains.

In other words, #marketsystems development did not automatically lead to increased #resilience. #marketlinks

Muench followed this example with two other market systems interventions (both from the M-RED Nepal project) that did lead to resilience gains once a dedicated effort was made to ensure resilience was incorporated into programming. Here, the aim of both market systems interventions was to incentivize disaster risk reduction while simultaneously increasing farmer profits.

The first approach identified a sector to fit a specific resilience intervention. Sugarcane, a crop classified for growth by the government of Nepal, can be grown in silty riverbeds to help reduce flooding and convert silt to productive agricultural land in the Terai. The sugarcane sector clearly made sense both in the Nepalese market system and as a crop to mitigate environmental risk. Once the strategy was outlined, Mercy Corps helped bring in buyers and increase production through a traditional market systems approach.

The second approach relied on choosing an intervention to fit a specific sector. In this case, dairy farming was already an established and important income opportunity for farmers in the foothills of Nepal. However, cattle can cause large-scale environmental degradation if allowed to graze in an unsustainable manner. In this case, Mercy Corps worked with farmers to increase planting of appropriate crops on hillsides, which could be used jointly for fodder and to help stabilize the hillside and reduce erosion. They also built stables to reduce degradation and give farmers greater control over cattle nutrition, leading to higher-quality milk and therefore more income.

Thanks, everyone! We learned a lot this morning from @mercycorps as well as from our attendees! #marketlinks

To hear key points from the presenters themselves, watch the short video below! 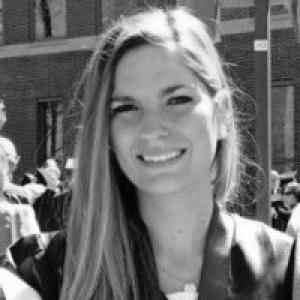 Post-Event Resources: Realizing the Potential of Development Impact Bonds: Is the Verdict Still Out?