Generally there is more emphasis within development projects to focus on direct and attributable results. Market facilitation approaches challenge that paradigm as they seek to catalyze broader systemic change. This means we need to seek ways to measure the indirect impact to which these projects are contributing. Indeed, these broader impacts are an important part of the foreign assistance story. This is an example of how one project is taking on that challenge.

The apparel sector in Haiti once employed around 80,000 people before a series of political disasters decimated it. Recently, the United States granted Haiti special trade access and development funding, which has helped spur new growth in the sector. New apparel-making capacity translates into the potential to earn more foreign currency and increase formal employment, which spills over into growth opportunities for other sectors. Working with USAID, the RTI-implemented Local Enterprise and Value Chain Enhancement (LEVE) project was able to estimate the broader employment gains that apparel sector growth has helped catalyze. The LEVE team is contractually limited to measuring only direct job creation,  but RTI conducted a study and found that initiatives that encourage formal job creation and stimulate the transition to higher value-add, “full package” forms of production increase indirect and induced job impacts substantially.  The study presents a more complete picture of the impact of USG support.

Working with a Haitian survey firm, RTI surveyed 1,200 apparel workers in three different industrial parks, asking about household income and expenses, the importance of jobs, and changes in their economic situation. RTI also contracted surveys of vendors situated near the parks to find out how much their incomes depended upon apparel workers. Interviews RTI staff conducted with apparel manufacturers and their suppliers provided estimates of production costs and the share of suppliers’ business supported by the apparel sector. This data collection yielded an economic profile of the Haitian apparel sector, its employees and suppliers, and the vendors where apparel workers spend their incomes. Integrating these data with economy-wide input-output data for the region allowed RTI to generate economic impact estimates based on a more comprehensive picture of the Haitian economy than was previously available.

Apparel workers reported valuable economic gains from their employment: three out of four workers believe their jobs have improved the economic condition of their household; two out of three workers are the main earners in their households; two out of five apparel workers weren’t bringing any income into the household before being employed; and, among those who had prior employment, incomes more than doubled on average. Many who had prior work were working informally (e.g. selling goods or services in the street) meaning there were no tax revenues, no employer benefits, and possibly less income predictability. This labor “formalization” could help improve public services and economic stability. Relatively steady sources of income also mean new opportunities for Haitian households to send another child to school, purchase durable goods, or invest in other opportunities. 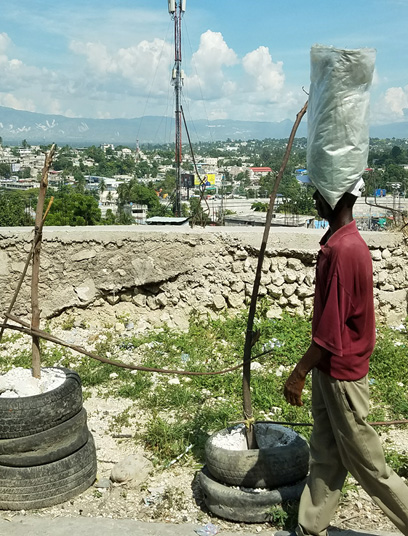 The work done by the 41,000 apparel workers supports 24,892 other jobs throughout the economy. Credit: Jared Woollacott.

The benefit of expanding and deepening the apparel sector extends beyond direct jobs created. For the 41,000 workers currently producing apparel, an estimated 11,456 people in Haiti are supplying the apparel sector through indirect jobs. As wages are spent locally, this supports jobs for local vendors, school teachers, and other services. An estimated 13,436 (induced) jobs are supplying goods and services to apparel sector workers. Thus, the work done by the 41,000 apparel workers supports 24,892 other jobs throughout the economy.

A lot of economic activity happens within the value chain before any apparel gets sewn in Haiti: Haitian drivers bring fabric and other supplies from the port or the Dominican Republic to the factory; workers unload the material into the factories; fuel and electricity is delivered, and so on. As apparel manufacturers begin to manage more of their supply chain, the broader impacts of direct job creation will be amplified. Several manufacturers are currently migrating from “cut and make” operations–– simply assembling the material shipped to them and returning a finished product––to “full package” operations where manufacturers take on more of the logistics and design, increasing the potential for positive economic impacts in Haiti. Full package operations employ more people in middle class administrative and management jobs, they are more likely to source their inputs domestically, and they are more competitive in the global apparel market. By supporting this transition, LEVE is contributing to employment growth within and beyond Haiti’s apparel sector.

Jared Woollacott is a senior economist who specializes in economy-wide modeling, including estimating employment, incomes, and value-added impacts of policies and programs.

Alan O’Connor is a senior economist and director of innovation economics at RTI, with nearly 20 years’ experience in applied microeconomics and economic development analysis

Julie Lostumbo is a senior economic development specialist at RTI International. She is a seasoned international development expert with 25 years of experience related to economic growth, youth development, and agribusiness programming.

The purpose of this study was to estimate the indirect and induced employment impacts of the Haitian apparel manufacturing sector. A focus on job creation solely at apparel manufacturers, often referred to as “direct employment,” underestimates the total number of jobs in the economy that...
Post

Using a decentralized water treatment and distribution system, Jim Chu, the founder and CEO of dloHaiti, is bringing safe, affordable water to thousands on the island. Chu recently participated in diaspora engagement roadshows hosted by USAID INVEST, which encouraged members of the Haitian...
KDID Event