Samson Radeny possesses over 20 years of experience in international development and management of strategic and innovative programs that address the health and social change needs of a wide range of audiences. Currently, Radeny works for Pact Inc. as Chief of Party for the large and complex U.S. President’s Emergency Plan for AIDS Relief (PEPFAR)/USAID-funded Yekokeb Berhan Program for Highly Vulnerable Children (HVC) in Ethiopia. Working collaboratively with Ethiopian Government, UNICEF, two international and over 40 local organizations, the 5-year program aims to reduce vulnerability among HVC and their families by strengthening systems and structures to deliver quality essential services and increase resiliency among vulnerable children and families throughout the country. Before joining Pact, Radeny worked for Catholic Relief Services as Chief of Party for a 4-year Global Development Alliance program in Malawi, which was funded by the U.S. President’s Emergency Plan for AIDS Relief PEPFAR/USAID, and at Save the Children USA, serving in a similar capacity for a large and complex national care and support program for orphans and vulnerable children at the Ethiopia Country Office, based in Addis Ababa, Ethiopia. Samson has served as Country Representative and Regional Program Advisor for the Johns Hopkins Bloomberg School of Public Health Center for Communication Programs based in Nairobi, Kenya and as Regional Program Director for Medical Assistance Program (MAP) International for East and Southern Africa. Samson holds a Ph.D. in Sociology.

As a long-time practitioner in programs for orphans and vulnerable children (OVC) in Africa, I have increasingly recognized the importance of economic strengthening as a core component of our interventions. I currently lead Ethiopia’s Yekokeb Berhan Program for Highly Vulnerable Children, the second largest U.S. Agency for International Development (USAID) OVC project in the world. The project aims to reduce vulnerability among highly vulnerable children and their families through systems strengthening and the promotion of resiliency.

Yekokeb Berhan prioritizes economic strengthening allocating 20 percent of our resources to help vulnerable households build economic security and enhance self-reliance through savings and investment in small- and medium-sized enterprises and accumulation of viable household assets. We utilize a community-based microfinance approach aimed at caregivers to support the household as a whole with the intention of impacting the lives of vulnerable children. In an effort to better understand and explore the direct involvement of orphans and vulnerable children in community-based savings-led microfinance, I think it’s important to review where we are today with caregiver community-based microfinance.

Our Approach to Community-Based Microfinance

Despite significant progress in the past decade, 29 percent of the population in Ethiopia, still lives in poverty—a major underlying cause of vulnerability that constrains their ability to thrive. Most vulnerable households often don’t have regular or any income at all and thus are unlikely to meet their basic family needs. 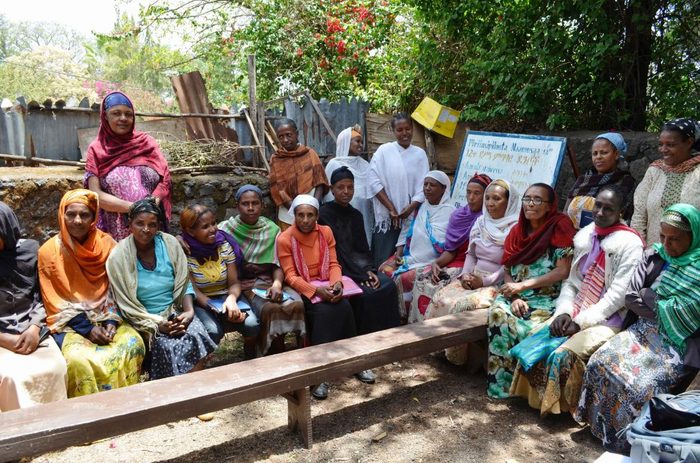 Yekokeb Berhan promotes Community Self-Help Savings Groups (CSSGs) to motivate households to develop the culture of saving, investment, and spending. This model is an adaptation of CARE International’s original Villages Saving and Loan Associations (VSLA) model, which formed the foundation for savings groups more generally. A typical CSSG is made up of 10 to 25 self-selected members, usually from the same neighborhood. Membership is open to both women and men whose households are classified as Strugglers, according to Yekokeb Berhan’s vulnerability analysis. CSSG group members and their households who participate in the program receive program support or services for needs as defined through an annual Child Support Index Assessment, routine monitoring and resultant care planning. These needs may include shelter, legal protection, health, food and nutrition, and parenting and psychosocial skills.

Once a CSSG is formed, its members are trained on basic principles of saving and lending. Groups meet at regular intervals—frequently during the first year but less frequency over time as a group becomes more mature. Each group elects a management committee at inception to provide leadership and develop a written constitution that provides a framework for governance; dispute resolution and disciplinary action; and conditions for saving, borrowing, and access to group benefits. Members save specified amounts periodically as agreed to by the group, and they can access loans to start or expand microenterprises.

Yekokeb Berhan has supported the formation of 2,590 CSSGs since 2013. Together, these groups have saved nearly $1.4 million—with about $700,000 saved in the past year alone, and they have provided more than $1.9 million in loans to group members. To motivate savings and accelerate investments, the program rewards groups and members who reach a threshold of $20 within 3 months by matching individual members’ savings on a 1:1 ratio. The total amount of loan provided to group members to date is over $1.9 million. Participation in groups remains extremely high with less than 1 percent dropout of members dropping out in the past year. 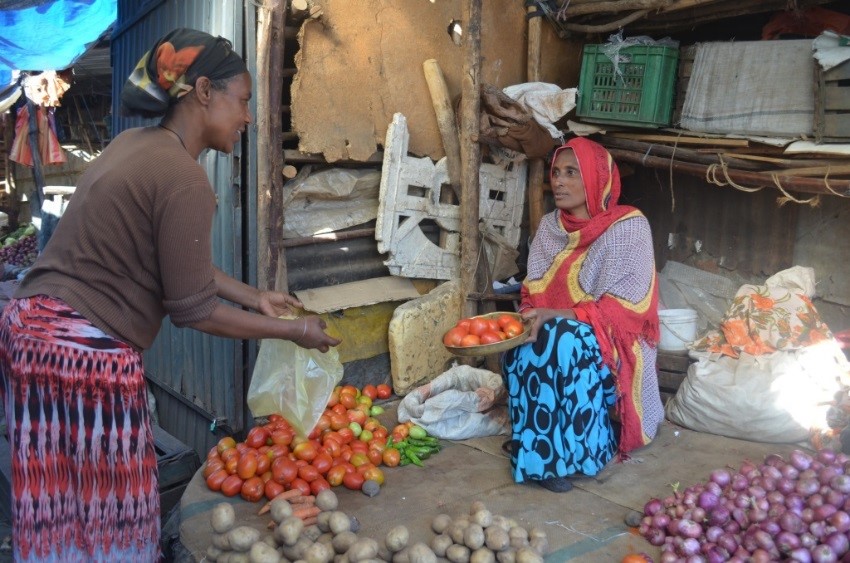 The Child Support Index Tool is used by Yekokeb Berhan for a variety of purposes, including measuring changes in household economic vulnerability. The tool is an adaptation of the Child Status Index developed by MEASURE Evaluation to meet the program’s tracking needs for care planning and well-being. Yekokeb Berhan analyzes 8 of the 20 indicators tracked by the Tool to develop a Vulnerability Index. The analysis is conducted annually to classify households into one of three categories based on their level of vulnerability—Destitute, Struggler, and Growing. For the past 3 years, the program has conducted these analyses annually for all households. 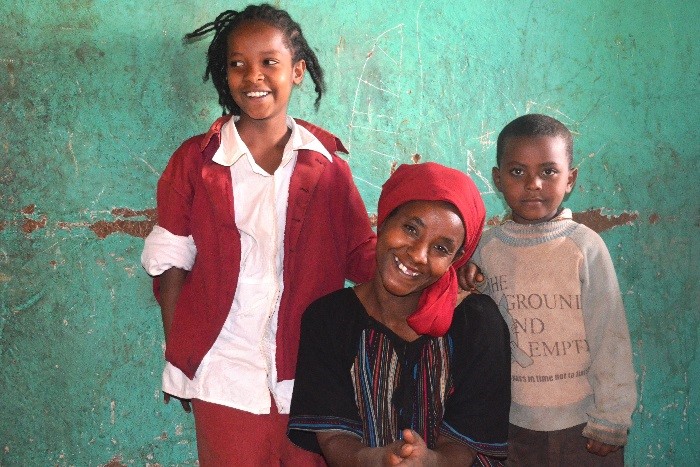 At least 49 percent of households engaged in CSSGs and microenterprise activities reported that they had either expanded or diversified their businesses over the past 1 year, and 58 percent of those involved in microenterprises indicated that they were making profit, saving more, and investing in assets such as housing and livestock. Anecdotal data gathered from CSSGs indicate that most members are using their income to meet family needs, particularly food, school materials, and health. These households are indeed on their way to financial security and will soon be graduated out of the program to create room for new households on the wait-list. The current graduation rate of 5 percent is expected to increase as interventions and household microenterprises are solidified.

Though CSSGs may be graduated from the program, they continue on their own with support from the local government’s small and microenterprise development agencies and private sector microfinance institutions to which they are linked. Their children also continue to be supported through a network of providers coordinated by the local community care coalitions/committees.

Most OVC programs that use a CSSG approach, including Yekokeb Berhan, target adult caregivers. Few programs have engaged vulnerable children, and the evidence of impact of OVC-focused savings groups on household economic stability is scarce. However, a small number of older vulnerable children in Yekokeb Berhan, particularly in child-headed households, are involved in CSSGs and micro/small business enterprises. As heads of their households, these youths have learned how to save and how to use their savings and loans from their groups to invest in small businesses and accumulate assets for their households.

While involving vulnerable children in savings groups and microenterprise activities has potential benefits, it may also present some risks for their future. As we have seen in our programming, potential benefits of OVC participation in savings groups include appreciation for savings culture and financial management, which could benefit the child both in the short- and the long- term. In the short-term, savings help children contribute to household income and meet some financial needs such as purchase of school materials.    In the long-term, savings could enhance financial discipline and enable children to invest in their future through education, business enterprises and asset acquisition.

While more research is needed to fully understand the potential impact (and risks) of CSSGs on OVC, it appears that a combination of savings groups and cash transfers—as reflected in evidence from pilot programs by the United Nations Children’s Fund and the United Nations Development Programme in a number of countries, including Ethiopia—may offer a viable path to financial security. These should be organized in ways that prevent dependency and motivate children to explore opportunities to make and save their own money without compromising their own education.

Programs need to help orphans and vulnerable children recognize the place of savings and small business vis-a-vis education and the pursuit of a future career. This requires programs to go beyond teaching children financial skills; they must also teach children the art of prioritization, discipline in time management, and the value of consistency and determination.

Studying the Past, Looking to the Future: Microfinance Lessons Become Foundational to PEPFAR Programs

Looking Ahead: The Future of Economic Strengthening

A Bridge to Adulthood: The Promise of Savings Groups for Vulnerable Children

In an interview for this blog series, Andrew Meaux and Barri Shorey from the IRC talk with Jason Wolfe, Senior Technical Advisor for the PEPFAR program, about the challenges facing orphans and vulnerable children, and the potential for impact of engaging them in savings-led economic...
Blog

Community-based savings-led microfinance for children and youth is a promising new frontier in addressing the needs of the most vulnerable kids in poor countries. Savings groups (SGs) interventions for adults have been shown to lead to increased spending on their children’s education...
[+] Leave feedback