ted climate change and gender issues. Megan has assessed value chains in challenging environments in Africa, Asia, the Americas and the Middle East. She has worked with private and public sector clients including USAID, the UN, the EU and the World Bank to support industries ranging from chickpeas and sesame in Ethiopia to cashmere in Mongolia, horticulture in the DRC, pineapples in Ghana and mangos in Pakistan. Megan previously worked as a venture capital analyst and has a Masters in International Economics.

USAID invests hundreds of thousands of dollars in assessments for each its value chain projects, either to guide pre-solicitation project design, at launch or throughout implementation. Volatile or very low resource environments, including those areas suffering from conflict, market failures, environmental degradation or other social, political or economic factors, present an especially great challenge to performing these analyses.

A few pitfalls to beware include:

Be safe in un-explored geographies. 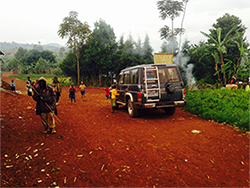 Value chain assessments are often performed in new geographies and sectors, previously un-explored by USAID or even other government or donor programs. This can be intriguing and  exciting but can also be challenging, as lodging and sanitation may not meet typical standards, and situations with police and military officers who are not accustomed to interacting with foreign inquisitors can escalate and may become dangerous. Hiring a guide who is deeply familiar with the target area can mitigate these risks, preferably one who speaks the local dialects, understands the motives of local officials and can otherwise avert danger.

Little data. There are often little to no available records for agriculture such as number of farmers, land cultivated or crops produced. National governments and international surveyors either do not have the resources, or conflict has prevented covering these areas. In 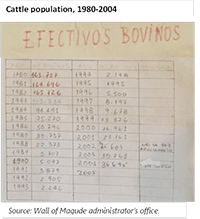 2016, one assessment team in Mozambique, observed this tally of cattle handwritten on the wall of the district administrator’s office which had not been updated since 2004—no other data exists, even though cattle are the mainstay of (legal) income and wealth in this very poor district. See the USAID/Mozambique Conservation Alternative Livelihoods Analysis. In the absence of data, assessors need to leverage what is available and find creative proxies to drive the conclusions.

Consider home consumption as an aspect of income. CGAP released its Financial Diaries with Smallholder Families study in February 2016 which examined three sets of farmers in Pakistan, Tanzania and Mozambique and showed that the poorest farmers (from the Nampula area of Mozambique) were “net consumers” of their agricultural products, i.e., consuming more than they sold, while the other two countries’ farmers, who were at higher income levels, were net sellers. Consuming higher portions of production indicates a lower level of linkage to markets and typically lower income and access to resources. Therefore, home consumption (“in-kind income” as CGAP labels it) is an important factor to include as a component of household income for such resource-poor populations.

Be wary of creating professional ‘attentistes’- waiting for outside help. In the Eastern DRC, decades of relief which provides free or heavily subsidized food and other agricultural inputs has created what local development workers call ‘attentisme’, the attitude where people are conditioned to rely on assistance and become well-trained in positioning themselves for aid, rather than investing and participating in a market economy. This undermines the incentives to build a sustainable business through entrepreneurial effort. Why work when it will come for free anyway? And even worse, the poorer you appear, when the more aid you can receive, beneficiaries have an incentive to downplay any income or positive development gains in the community. Or course, in a state of emergency, relief aid is essential, but the longer term effects must be considered when designing programs. In the Eastern DRC, USAID’s Food for Peace initiative, which delivers food aid, will target many of the same populations as its anticipated agricultural value chain activities. Assessors should be aware of these incentives and stage interventions to avoid overlap or make sure the programs complement each other. See the recent USAID/DRC VC assessment for the Kivus and Katanga.

Survival trumps environmental concerns. Even if they understand 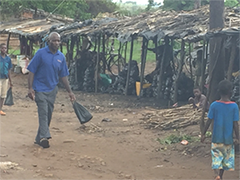 the repercussions, people struggling for survival will almost always prioritize feeding their family over preserving the environment. Imposing restrictions on for instance non-organic pesticides could even imperil food security in dire situations. In Gorongosa National Park, a poor family recently chopped down an area of rare trees that were being studied by international botanists to plant a simple acre of maize; the scientists were devastated, but who can blame these local farmers for planting to feed their families? Assessors could seek to understand how a balance of financial incentives or alternative opportunities could deter damaging activities without threatening their survival.

Trust in markets is low. Most smallholders in very low-resource areas are not market savvy, and there is a lot of well-founded mistrust between farmers and the middle-men traders who hold greater market power (e.g. information, access to finance, storage facilities) and are perceived to be paying ever lower prices to farmers. To achieve USAID’s goal of building value in the whole supply chain, all parties must work to explore aligned incentives, overcome trust issues and invest in their supply chains so that they can lay the foundation for longer term market relationships. Engaging smallholders in light conversation about the weather or family matters can be an effective ice-breaker to build trust; also, dedicating about two hours with each household or group interviewed will bring the best results—small-holders are often willing to dedicate the time and may even have traveled long distances to attend, so the face time is appreciated.

Assessing value chains is a highly creative endeavor, driving the allocation of hundreds of millions of dollars of USAID programs, but the framework is not a one-size fits all tool. Understanding the dynamics of the targeted geography is critical to delivering meaningful value chain assessments in volatile or low resource environments.

USAID invests hundreds of thousands of dollars in assessments for each its value chain projects, either to guide pre-solicitation project design, at launch or throughout implementation. Volatile or very low resource environments, including those areas suffering from conflict, market...
Library Resource

Step 1: Value Chain Analysis Understanding the nature of the value chain a is a key first step in conducting a MicroCLIR assessment. Assessors must understand how the value chain system functions, how the players interact with each other, how the good or...
Post

4.1.4. Recommendations for Adapting the Value Chain Approach to Conflict-Affected Contexts

The following practical lessons can assist practitioners as they assess the conflict and consider the best way to move forward in designing and implementing a value chain project. The recommendations can be divided into three categories: those related to sequencing or timing of activities,...
[+] Leave feedback