Mentor-preneurship: No entrepreneur can do it alone

Having grown up and lived in Qatar, Cyprus, the UK, Tanzania, Kenya, the UAE and the US, Kathleen has over 14 years of multicultural, for-profit and not-for-profit experience within the Middle East

, Africa and the UK. She is a member of the Entrepreneurs Organisation East Africa Chapter and Global Philanthropy Circle.

Kathleen has been part of 3 start-ups in the Middle East, 2 of which have been sold. She has a robust understanding of the SME sector and the challenges that entrepreneurs and SMEs face today when setting up and growing their businesses, as well as the need and benefit of mentoring.

When not working, Kathleen loves to read and is an avid traveller, spending a lot of her spare time in East Africa, predominantly Kenya, where she continues to practice her Kiswahili, learns about their growing entrepreneurial ecosystem, visits her adopted elephant, and takes every opportunity to enjoy the African/safari plains.

Some of the highest youth unemployment rates are found in the Middle East and North Africa (MENA), where nearly one-third of young people are unemployed. Entrepreneurship is part of the solution to this problem, increasing employment and spurring economic growth. But entrepreneurs need to develop their human capital — the knowledge, skills and behaviours learned through formal and informal learning — to be successful.

How is mentoring a key component of human capital development and how can it help an entrepreneur?
Working within 13 MENA countries, the Mowgli Foundation has seen the importance of developing human capital within entrepreneurship ecosystems first-hand. We focus on holistic mentorship to help entrepreneurs develop not only their businesses, but at times more importantly, their core spirit and behaviours that are so critical to their long-term success.

Entrepreneurial learning often goes through several distinct phases of growth and development, along with the business. Within these phases, three of the most challenging times, where we believe an entrepreneur can benefit from a highly skilled mentor are: 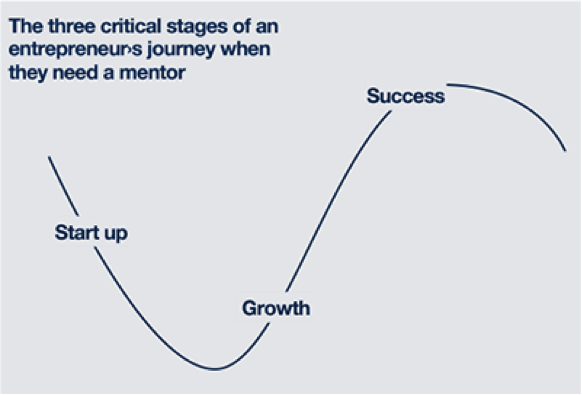 During each of these key transitional stages a mentor can provide vital guidance and support to entrepreneurs to support them in finding the courage and resources to move their business forward.

Business mentoring is still a relatively new concept in the MENA region. While informal mentoring relationships between friends and family members are reasonably commonplace, true and focused entrepreneurial mentoring is still in its infancy. Given this, our focus has been to not only raise awareness as to the importance of mentoring but to train mentors so that they can effectively and fully support and empower entrepreneurs to drive the much-needed economic growth.

How has mentoring helped Mowgli Entrepreneurs achieve economic growth?
Since 2008, we have delivered over 85 mentoring programs and have matched over 780 entrepreneurs with trained mentors and facilitated their 12-month one-to-one mentoring relationships in 14 countries.

Throughout our programs, we have 3 desired areas of impact:

Over 8 years, Mowgli Entrepreneurs have achieved the following during their mentoring year:

How has mentoring helped funders achieve return on investment through economic growth?
Government, philanthropic and corporate investors in Mowgli mentoring programs have been able to achieve a significant Return on Mentoring Investment (ROMI) of 890% on their initial project investments vs. the economic generation resulting from the jobs created and safeguarded. For more information, read the report on "The Mentoring Effect on Economic Growth."

Supporting the Entrepreneurship Ecosystem
Mentorship isn’t the only piece of the puzzle. We believe that a number of factors are required to support enterprise development:

In order for entrepreneurs to grow successful and sustainable businesses, they need a multitude of both hard and soft human capital support structures around them. Providing an entrepreneur with business training and skill development is critical.  However, we believe that if they do not have the inner hope, confidence, motivation and/or learning mind-set to utilise these skills and learnings, the investment will be short-lived.

We fundamentally believe that in order for investments in entrepreneurial development to be fully leveraged for the benefit of all in the long-term, mentoring is required as a key component in the mix to truly support the core of the entrepreneur, on both a personal and professional level.

Mowgli provides mentoring programs that inspire, connect and guide entrepreneurs and leaders to overcome life's personal and business challenges through the:

Mowgli has an alumni community with over 1,680 members and has matched over 780 entrepreneurs with trained mentors in 14 countries: Algeria, Bahrain, Egypt, Jordan, Lebanon, Libya, Morocco, Palestine, Qatar, Saudi Arabia, Syria, Tunisia, Yemen and the UK.

In 2016, the European Mentoring & Coaching Council (EMCC) awarded the European Quality Award (EQA) to Mowgli for its Mowgli Mentoring Experience (MME) program and in 2012, Mowgli received the Mohammed bin Rashid Award for Young Business Leaders Award for the 'Best Mentor Network in the Arab Region.’

Small Business Owners and the Need for Mentors

The Use of Nonfinancial Services to Help Grow Women's Leadership in SMEs: The Kyrgyzstan Case

Introduction Who: ACDI/VOCA and Bai Tushum Fund (BT Fund) When: September 2012 - 2015 What: ACDI/VOCA and BT Fund have partnered to target high-potential women entrepreneurs who own small and medium enterprises (SMEs). ...
Event

Cairo – Fifteen business mentors and over 30 entrepreneurs engaged in a one-on-one mentoring event sponsored by the U.S. Government’s Global Entrepreneurship Program (GEP) and the Association...
Blog

This post is the second of a two-part blog series showcasing a question and answer session with Christy Sisko, Technical Manager for Asia and Middle East Economic Growth Best Practices at Chemonics, on the...
[+] Leave feedback